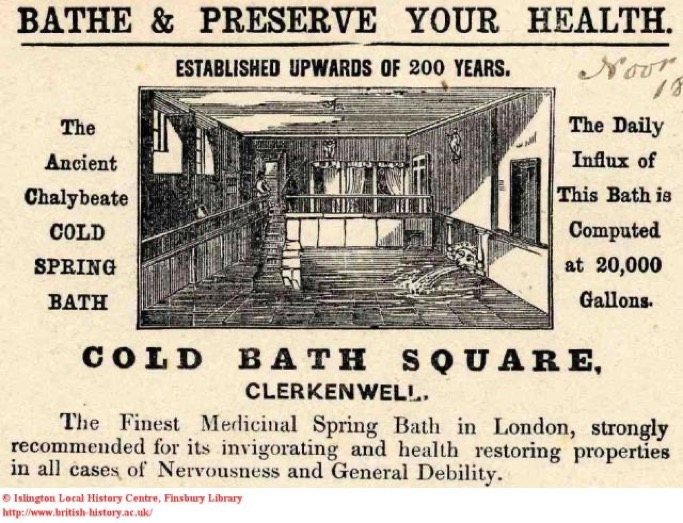 In an unobtrusive turning off Farringdon Road lies the site of the ‘Cold Bath’ spring. First discovered in the late 1600s and turned into a spa with claimed medicinal waters, by the later 1700s it was expanded to include a walled garden square around a central bath house, with a spacious large marble bath filled to a 4’ 7” depth by the cold spring, producing 20,000 gallons of water a day. This ad appeared in Bradshaw’s Guide in the later 1800s.

Houses described as handsome and regular surrounded three sides of the square. Jane Lewson, a recluse, lived to a great age at number 12 and was said to be the inspiration for Miss Havisham in Dickens’ ‘Great Expectations’. The spa and surrounding buildings were eventually pulled down in the 1890s when Rosebery Avenue was built.

Hear about Cold Bath Square – and many other historic Clerkenwell buildings on May 28th for my next Clerkenwell Crime and Punishment Walk.